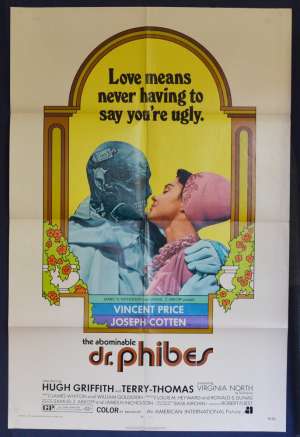 The Abominable Dr. Phibes is a 1971 British comedy horror film directed by Robert Fuest, written by William Goldstein and James Whiton and starring Vincent Price and Joseph Cotten. Its art deco sets, dark humour and performance by Price have made the film and its sequel Dr. Phibes Rises Again cult classics. The film also features Terry-Thomas and Hugh Griffith, with an uncredited Caroline Munro appearing in still photographs as Phibes's wife. The film follows the title character, Anton Phibes, who blames the medical team that attended to his wife for her death four years prior and sets out to exact vengeance on each one. Phibes is inspired in his murderous spree by the Ten Plagues of Egypt from the Old Testament. Applauded by critics and audiences, the film has stood the test of time.