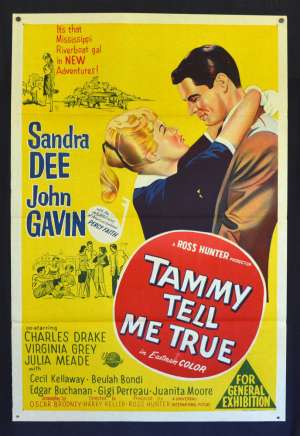 Very Rare Original Australian One Sheet movie poster. Tammy Tell Me True is a 1961 American comedy film directed by Harry Keller starring Sandra Dee and John Gavin, Charles Drake, Virginia Grey and Julia Meade. The film was based on the 1959 novel, which the New York Times described as "a cheerful change of pace from current novels of conflict and depression". Sandra Dee was announced for the lead role in September 1960. The Chicago Tribune called it "calculated cuteness... relieved by a likeable performance from Sandra Dee." There were four American Tammy movies about a naive 17-year-old girl from Mississippi produced by Universal between 1957 and 1967. Sandra Dee appeared in two, this and Tammy And The Doctor (1963).  Original Tammy posters in this condition are now very hard to find.