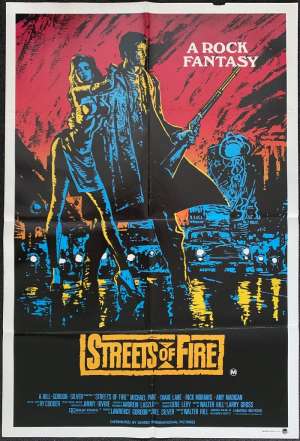 Australian One Sheet Poster with rare Riehm artwork.Streets of Fire is a 1984 American neo-noir rock musical film directed by Walter Hill and co-written by Hill and Larry Gross. The film is described in its opening credits and posters as "A Rock & Roll Fable “and is a mix of various movie genres with elements of retro-1950s woven into then-current 1980s themes. The concept for Streets of Fire came together during the making of 48 Hrs., and reunited director Walter Hill with producers Lawrence Gordon and Joel Silver, and screenwriter Larry Gross, all of whom worked together on that production. When it came to casting the movie, Hill wanted to go with a young group of relative unknowns. Among the actors they saw for the role of Tom Cody were Eric Roberts, Tom Cruise and Patrick Swayze. Gross says they wanted Tom Cruise and made him an offer, but he had already accepted another role. Hill heard about Michael Paré from the same agent who recommended Eddie Murphy to him for 48 Hrs.At the time he was cast in March 1983, Paré had appeared in two films, Eddie and the Cruisers and Undercover, which had not yet been released. For Hill, Paré "had the right quality. He was the only actor I found who was right for the part. Supporting Pare were Diane Lane, Willem Dafoe, Amy Madigan, Rick Moranis and Bill Paxton all of whom went on to find success in their own right.