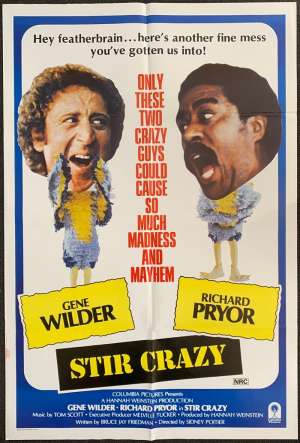 Stir Crazy is a 1980 American comedy film directed by Sidney Poitier, produced by Hannah Weinstein and written by Bruce Jay Friedman. The film stars Gene Wilder and Richard Pryor as unemployed friends who are given 125-year prison sentences after being framed for a bank robbery. While in prison they befriend other prison inmates. The film reunited Wilder and Pryor, who had appeared previously in the 1976 comedy thriller film Silver Streak. The film was released in the United States on December 12, 1980 and was a major financial success.