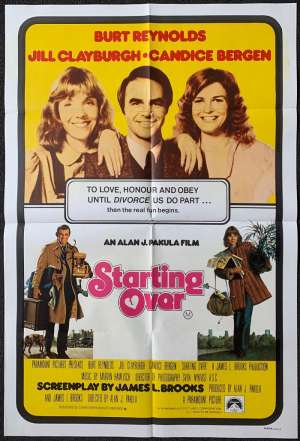 One Sheet Poster.Starting Over is a 1979 American comedy film based on Dan Wakefield's 1973 novel, produced by James L. Brooks, and directed by Alan J. Pakula. Starring Burt Reynolds, Jill Clayburgh, and Candice Bergen, Charles Durning and Kevin Bacon (his scene was deleted but still credited).It follows a recently divorced man who is torn between his new girlfriend and his ex-wife. Marvin Hamlisch and Carole Bayer Sager wrote three original songs for the film, "Easy for You," "Better Than Ever", and "Starting Over". Critically, The Washington Post wrote, "As the newly divorced hero of 'Starting Over,' a delightful romantic comedy destined for enormous well-deserved popularity, Burt Reynolds reaches a breathtaking new plateau of screen acting dexterity." It was nominated for two Academy Awards for Best Actress in a Leading Role (Clayburgh) and Best Actress in a Supporting Role (Bergen).