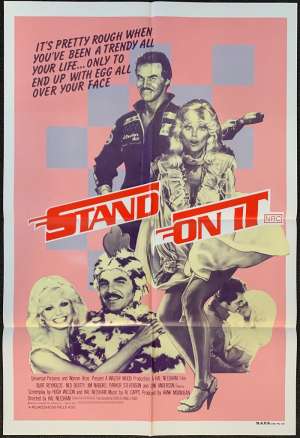 Stand On It Poster Original One Sheet 1983 Burt Reynolds

One Sheet Poster.Stand On It Aka Stroker Ace is a 1983 American action-comedy sport film directed by Hal Needham and starring Burt Reynolds as the eponymous Stroker Ace, a NASCAR driver. Burt Reynolds turned down the role of astronaut Garrett Breedlove in Terms of Endearment to do this film. The role went to Jack Nicholson, who went on to win an Oscar. Reynolds said he made this decision because "I felt I owed Hal more than I owed Jim". The co-stars were Jim Nabors, Loni Anderson, Ned Beatty, Parker Stevenson, and Bubba Smith, with appearances by many actual NASCAR drivers for authenticity. Stand On It was filmed in North Carolina Georgia, and Alabama at Charlotte Motor Speedway, Talladega Superspeedway and the Atlanta Motor Speedway in Hampton, Georgia.