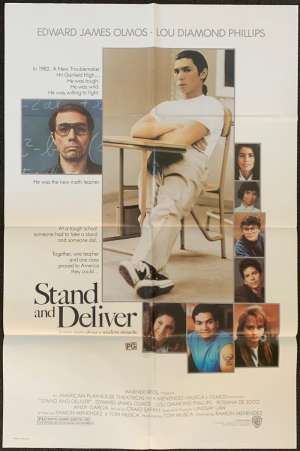 USA International One Sheet Poster.Stand and Deliver is a 1988 American drama film based on the true story of a high school mathematics teacher, Jaime Escalante. Directed by Ramon Menendez who also wrote the screenplay with Tom Musca who also acted as producer, the film starred Edward James Olmos, Lou Diamond Phillips, Andy Garcia, Estelle Harris and Virginia Paris. For portraying Escalante, Edward James Olmos was nominated for the Academy Award for Best Actor at the 61st Academy Awards. The film won the Independent Spirit Award for Best Feature in 1988. The film's title refers to the 1987 Mr. Mister song of the same name, which is also featured in the film's end credits. The film was critically successfully and made its money back 13 times over.