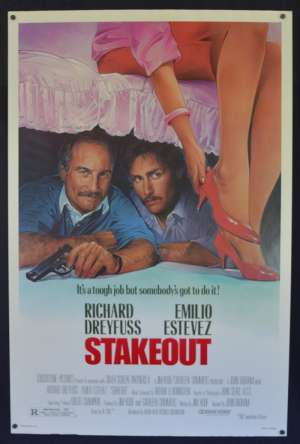 One Sheet Poster artwork by Steven Chorney. Stakeout is a 1987 American crime-comedy film directed by John Badham and starring Richard Dreyfuss, Emilio Estevez, Madeleine Stowe, Aidan Quinn, and Forest Whitaker. The screenplay was written by Jim Kouf, who won a 1988 Edgar Award for his work. Although the story is set in Seattle, Washington, the movie was filmed in Vancouver, British Columbia. A sequel, Another Stakeout, followed in 1993.