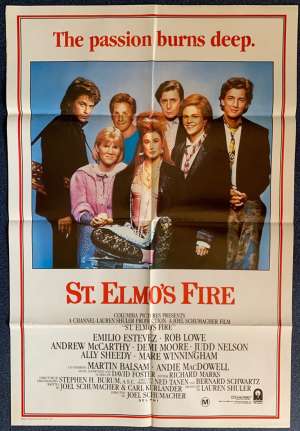 One Sheet Poster.St. Elmo's Fire is a 1985 American coming-of-age film directed by Joel Schumacher. The movie, starring Emilio Estevez, Rob Lowe, Andrew McCarthy, Demi Moore, Judd Nelson, Ally Sheedy, Mare Winningham and Andie McDowell, centres on a clique of recent graduates of Washington, D.C.'s Georgetown University, and their adjustment to post-university life and the responsibilities of adulthood. This film is a prominent movie of the Brat Pack genre. Estevez, Nelson, and Sheedy were cast through recommendations from John Hughes, who had cast them in The Breakfast Club. Demi Moore was required to go to rehab before shooting. Critics felt the film fell midway between The Big Chill and The Breakfast Club. "St. Elmo's Fire Theme song - (Man in Motion)" hit No. 1 on Billboard's Hot 100 chart for two weeks in September 1985.On a Budget of 10 million it took in 38 million.