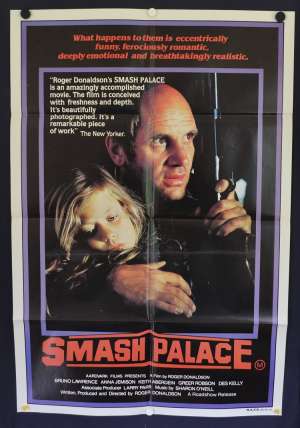 Smash Palace is a New Zealand feature film, released in April 1982. The film chronicles a former race car driver (played by Bruno Lawrence) who inadvertently helps ruin his own marriage, then kidnaps his daughter (Greer Robson). Lawrence's character runs a car wrecking yard in an isolated area of New Zealand's North Island. Smash Palace was the second feature directed by Australian Roger Donaldson .Critical acclaim in the United States won him interest from Hollywood, and the chance to direct the first of a number of films financed outside of New Zealand ie. The Bounty, No Way Out, Thirteen Days, Dante’s Peak etc. The film won much acclaim for the performance of Bruno Lawrence, one of New Zealand's best-known actors. It was successful in its home land, and received positive reviews in the United States; Veteran critic Pauline Kael described it as "amazingly accomplished". Roger Ebert called it one of the best films of 1981, The New York Times picked it as one of its ten best movies of the year. The soundtrack was composed and performed by New Zealand-born singer Sharon O'Neill.