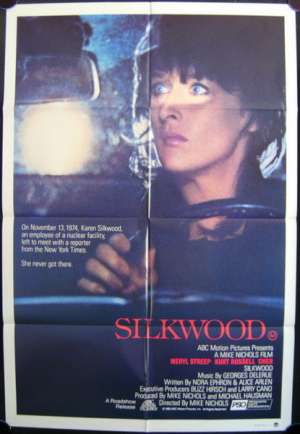 Like most people in her Oklahoma home town, Karen Silkwood (Meryl Streep) worked in a facility that produced highly radioactive plutonium. The plant balanced profits against worker safety, and Karen herself participated in this charade of economic survival...until the inevitable happened to her. Exposed to a lethal dose of plutonium poisoning, Karen faced the indifference and denial of her company.Too spirited to be silenced, she voiced her protests and became a threat to her company...to an entire industry and the government agencies that monitored it. One day she left to meet with a reporter, intending to blow the whistle on the dangerous practices of her plant.But due to a mysterious car crash, she never got there. Was her death accidental, or was she murdered by powers as potentially lethal as the atom bomb?Nominated for five Academy Awards, including Best Director, SILKWOOD is a powerful and compelling film.