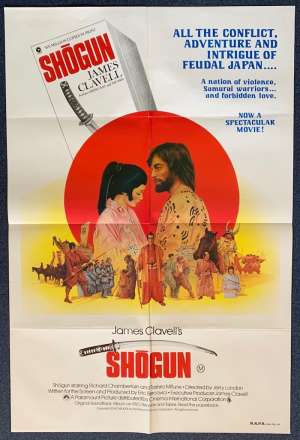 Shōgun is an American television miniseries based on the 1975 novel of the same name by James Clavell, who also was the executive producer of the miniseries. Starring Richard Chamberlain, Toshiro Mifune, Yoko Shimada,Damien Thomas, John Rhys-Davies & Michael Hordern.It was first broadcast in the United States on NBC over five nights between September 15 and September 19, 1980. To date, it is the only American television production to be filmed on location entirely in Japan, with additional sound stage filming also taking place in Japan at the Toho studio. A heavily truncated 125-minute edit of the miniseries was released in 1980 to European theatrical film markets. This was also the first version of Shōgun to be released to the North American home video market (a release of the full miniseries did not occur until later). The theatrical version contains additional violence and nudity that had been removed from the NBC broadcast version.