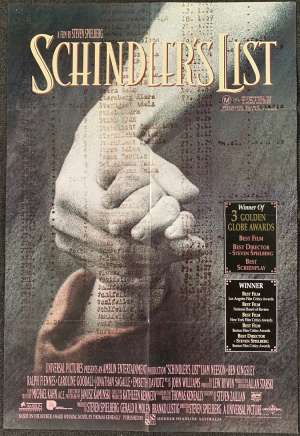 Australian One Sheet Poster art by Morton Shapiro.Schindler's List is a 1993 American epic historical period drama film directed and co-produced by Steven Spielberg and scripted by Steven Zaillian. It is based on the novel Schindler's Ark by Australian novelist Thomas Keneally. The film relates a period in the life of Oskar Schindler, an ethnic German businessman, during which he saved the lives of more than a thousand mostly Polish-Jewish refugees from the Holocaust by employing them in his factories during World War II. It stars Liam Neeson as Schindler, Ralph Fiennes as SS officer Amon Göth, and Ben Kingsley as Schindler's Jewish accountant Itzhak Stern. The film opened on December 15, 1993. By the time it closed in theaters on September 29, 1994, it had grossed $96.1 million ($159 million in 2016 dollars) in the United States and over $321.2 million worldwide. Schindler's List received acclaim from both film critics and audiences winning 7 academy awards and being nominated for another 5.