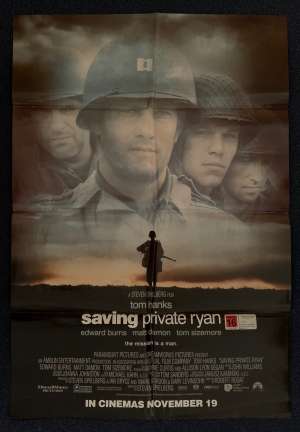 One Sheet Double Sided Movie Poster.Saving Private Ryan is a 1998 American epic war film directed by Steven Spielberg and written by Robert Rodat. Set during the Invasion of Normandy in World War II, the film is notable for its graphic portrayal of war and for the intensity of its opening 27 minutes, which includes a depiction of the Omaha Beach assault during the Normandy landings. The film follows United States Army Rangers Captain John H. Miller (Tom Hanks) and his squad (Tom Sizemore, Edward Burns, Barry Pepper, Giovanni Ribisi, Vin Diesel, Adam Goldberg, and Jeremy Davies) as they search for a paratrooper, Private First Class James Francis Ryan (Matt Damon), the last surviving brother of three servicemen killed in action. Harrison Ford and Mel Gibson were initially considered for the role of Miller. After the cast went through training supervised by Marines veteran Dale Dye, the film's principal photography started in June 1997 and lasted two months. The film's D-Day scenes were shot in Ballinesker Beach, Ireland and used members of the army reserve of the Irish Army as infantry for the D-Day landing. Released on July 24, 1998, Saving Private Ryan received acclaim from critics and audiences for its performances, particularly from Hanks, realism, cinematography, score, screenplay, and Spielberg's directing. It was also a box office success; it grossed $216.8 million domestically, making it the highest-grossing film of 1998 in the United States, and $481.8 million worldwide, making it the second-highest-grossing film of 1998 worldwide. The film won many awards including 5 academy awards. Since its release, Saving Private Ryan has been considered as one of the greatest films ever made.