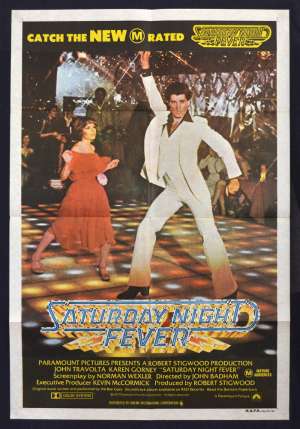 One Sheet Poster 1979 Re-Issue.Saturday Night Fever is a 1977 American musical drama film directed by John Badham. It stars John Travolta as Tony Manero, Karen Gorney as Stephanie Mangano, and Donna Pescow as Annette. A huge commercial success, the film significantly helped to popularize disco music around the world and made Travolta a household name. The Saturday Night Fever soundtrack, featuring disco songs by the Bee Gees, is one of the best-selling soundtracks of all time. After the success of the first run, in 1979, the film's content was re-edited into a toned down, M-rated (Australian) version and re-released during a second run – hence the re-released poster, not only to attract a wider audience, but also to capitalize on attracting the target audience of the teenagers who were not old enough to see the film by themselves, but who made the soundtrack album to the film a monster hit.