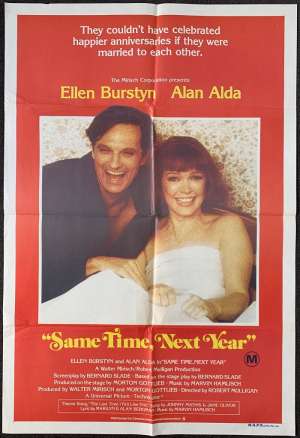 One Sheet Poster.Same Time, Next Year is a 1978 American romantic comedy-drama film directed by Robert Mulligan. The screenplay by Bernard Slade is based on his 1975 play of the same title. The film stars Alan Alda and Ellen Burstyn. The storyline goes: In 1951, at an inn on the Mendocino County coast, Doris (Ellen Burstyn), a 24-year-old housewife from Oakland, meets George (Alan Alda), a 27-year-old accountant from New Jersey at dinner. They have a sexual tryst, then agree to meet once a year to rekindle the sparks they experienced at their first meeting, despite both being happily married with children. Exteriors for the film were shot at the Heritage House Inn, a well-known resort and bed & breakfast in Little River, California, seven miles south of Mendocino, California. The shell of the cottage was built on a temporary foundation overlooking the Pacific Ocean, but the interior was filmed on the Universal Studios sound stage in Los Angeles. After filming was completed, Universal paid for the shell to be relocated to a permanent foundation and the interior was outfitted with the studio furnishings. The cottage became a popular romantic getaway, so popular in fact that the Heritage House eventually partitioned the cottage in half and added a second bathroom to the opposite end. One half of the cottage was called "Same Time" and the other half called "Next Year". Paul McCartney had composed a title song for the film, which he recorded with Wings, that was not used. He later released it as the B-side of a single in 1990. The theme song ultimately used was "The Last Time I Felt Like This," written by Marvin Hamlisch and Alan and Marilyn Bergman and performed by Johnny Mathis and Jane Olivor. The film was nominated for several Golden Globe and Academy Awards.