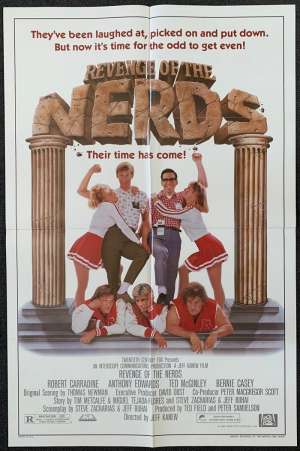 Revenge Of The Nerds Poster Original USA One Sheet Poster 1984

USA One Sheet Poster.Revenge of the Nerds is a 1984 American comedy film directed by Jeff Kanew, and starring Robert Carradine and Anthony Edwards, with Curtis Armstrong, Ted McGinley, Julia Montgomery, Brian Tochi, Larry B. Scott, Michelle Meyrink, John Goodman, and Donald Gibb.The film's plot chronicles a group of nerds at the fictional Adams College trying to stop the ongoing harassment by the jock fraternity, the Alpha Betas, in addition to the latter's sister sorority, Pi Delta Pi. Critics said were quoted as saying "Undeniably lowbrow but surprisingly sly, Revenge of the Nerds has enough big laughs to qualify as a minor classic in the slobs-vs.snobs subgenre." "We Are the Champions" by Queen is played during the finale of the film.