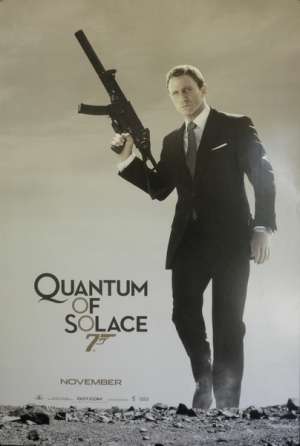 One Sheet Poster Qantum Of Solace. Quantum of Solace is a 2008 spy film and the twenty-second in the James Bond series produced by Eon Productions. Directed by Marc Forster, it is a direct sequel to Casino Royale, and the second film to star Daniel Craig as the fictional MI6 agent James Bond. The film also stars Olga Kurylenko, Mathieu Amalric, Gemma Arterton, Jeffrey Wright, and Judi Dench. In the film, Bond seeks revenge for the death of his lover, Vesper Lynd, and is assisted by Camille Montes, who is plotting revenge for the murder of her own family. The trail eventually leads them to wealthy businessman Dominic Greene, a member of the Quantum organisation, who intends to stage a coup d'état in Bolivia to seize control of their water supply. Producer Michael G. Wilson developed the film's plot while the previous film in the series, Casino Royale, was being shot. The title was chosen from a 1959 short story in Ian Fleming's For Your Eyes Only, though the film does not contain any elements of that story. Location filming took place in Mexico, Panama, Chile, Italy, Austria and Wales, while interior sets were built and filmed at Pinewood Studios. Forster aimed to make a modern film that also featured classic cinema motifs: a vintage Douglas DC-3 was used for a flight sequence, and Dennis Gassner's set designs are reminiscent of Ken Adam's work on several early Bond films. Quantum of Solace premiered at the Odeon Leicester Square on 29 October 2008 with reviews mainly praising Craig's performance, the darker, grittier and realistic tone and the film's action sequences.