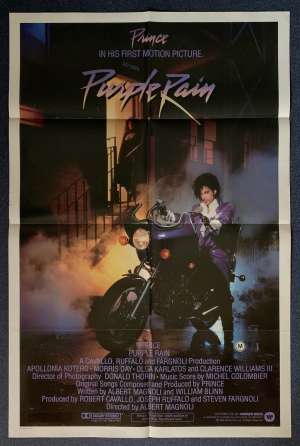 Highly collectible USA One Sheet International Poster.Purple Rain is a 1984 American rock musical drama film directed by Albert Magnoli. The film stars Prince in his acting debut playing The Kid, a character based in part on Prince himself. Purple Rain was developed to showcase Prince's talents, and the film contains several concert sequences. Principal photography took place almost entirely in Minneapolis: the film features many local landmarks, including the Crystal Court of the IDS Center (also shown in segments of the opening credits to The Mary Tyler Moore Show) and the legendary First Avenue nightclub. First Avenue was paid $100,000 for use of the club in filming; it was closed for 25 days. The Huntington Hotel, where Apollonia stayed, is located on Main Street in downtown Los Angeles. In the film, it is supposed to be across the street from First Avenue. The motorcycle Prince rides in the film is a customized Hondamatic Honda CM400A.Although Warner Bros. considered the film "outrageous" at the time, it was accepted for distribution after an internal debate which turned out to be a very wise decision. Purple Rain grossed over $72 million worldwide, against its $7.2 million budget. The film won an Oscar for Best Original Song Score, the last to receive the award. Purple Rain has been regarded by publications and critics as one of the greatest musical films. A semi-sequel, Graffiti Bridge, was released in 1990. After Prince's death on April 21, 2016, original memorabilia connected with this film such as this poster have become hugely collectible.