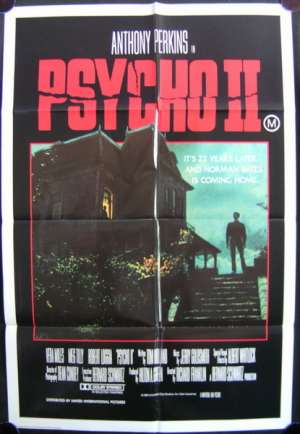 Original One Sheet Poster. Psycho II is a 1983 American slasher film directed by Richard Franklin, written by Tom Holland, and starring Anthony Perkins (Before landing Perkins, the studio was exploring recasting the part and Christopher Walken was among those considered), Vera Miles, Robert Loggia, and Meg Tilly. It is the first sequel to Alfred Hitchcock's Psycho and the second film in the Psycho series. Set 22 years after the first film, it follows Norman Bates after he is released from the mental institution and returns to the house and Bates Motel to continue a normal life. However, his troubled past continues to haunt him. In preparing the film, Universal hired Holland to write an entirely different screenplay, while Australian director Franklin, a one-time student of Hitchcock, was hired to direct. Hilton A. Green, assistant director of the original Psycho, was contacted and asked if he wanted to produce the film. Green, fearing that Hitchcock may not have approved of sequels to his films, called Hitchcock's daughter Patricia Hitchcock and asked what she thought of the film. Patricia Hitchcock gave her blessing to the film; saying that her father would have loved it. The film marked Franklins's American feature film debut. Released on June 3, 1983, Psycho II grossed $34.7 million at the box office on a budget of $5 million.