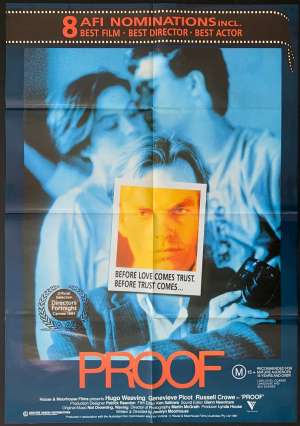 Proof is a 1991 Australian comedy-drama film written and directed by Jocelyn Moorhouse, and starring Hugo Weaving, Geneviève Picot and Russell Crowe. The film was released in Australia on 15 August 1991. It was chosen as "Best Film" at the 1991 Australian Film Institute Awards, along with 5 other awards, including Moorhouse for "Best Director", Weaving for "Best Leading Actor", and Crowe for "Best Supporting Actor".