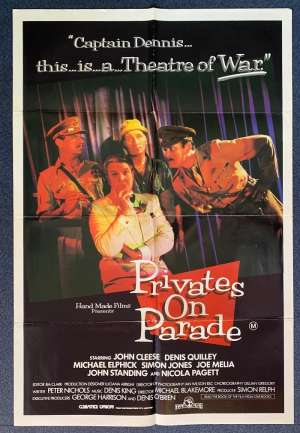 One Sheet Poster.Privates on Parade is a 1982 film adaptation of the Peter Nichols play of the same name about a fictional – and mostly gay – military entertainment group, the "Song and Dance Unit, Southeast Asia" assembled to entertain the troops in the Malayan jungle during the Malayan Emergency. The film starred John Cleese and it was executive produced by George Harrison (Beatle) of Handmade Films. Handmade Films was responsible for most of Monty Python’s movies.