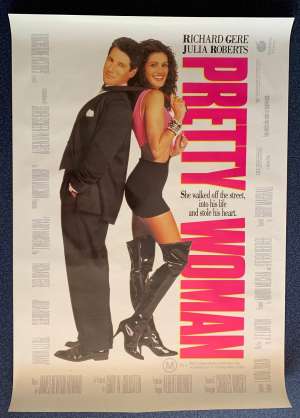 Rare Rolled One Sheet Poster. Pretty Woman is a 1990 American romantic comedy film directed by Garry Marshall from a screenplay by J. F. Lawton. The film stars Richard Gere and Julia Roberts, and features Hector Elizondo, Ralph Bellamy (in his final performance), Laura San Giacomo and Jason Alexander in supporting roles. Both Gere and Roberts were not the director’s first choices for their roles after many leading stars had turned the director down. It was widely successful at the box office and became one of the highest-grossing films of 1990. The film saw the highest number of ticket sales in the U.S. ever for a romantic comedy. The film received positive reviews, with Roberts's performance being praised, for which she received a Golden Globe Award and a nomination for the Academy Award for Best Actress.