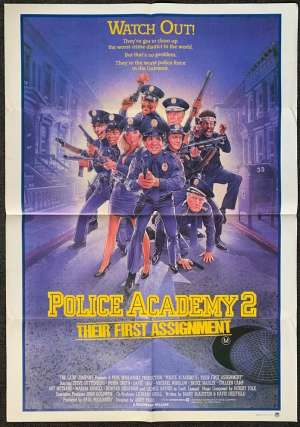 Australian One Sheet Poster. Police Academy 2: Their First Assignment is a 1985 American comedy film directed by Jerry Paris. It is the second instalment in the Police Academy franchise and the sequel to Police Academy. Many actors return from the first film to respectively reprise their roles. This was the only film in the series that does not feature Leslie Easterbrook as Lt. Debbie Callahan. In the film, the Police Academy cadets have graduated and are assigned to the worst precinct in town, where they have to help Captain Pete Lassard fight Zed's gang. Police Academy 2: Their First Assignment opened on 1,613 screens, grossing $10,675,896 in its opening weekend, setting a record for March. The film grossed $114.993 million worldwide and made a profit of $20.5 million.