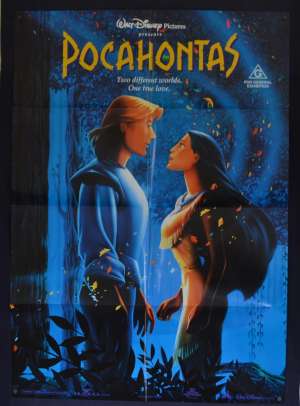 One Sheet Poster.Pocahontas is a 1995 American animated musical romantic drama film produced by Walt Disney Feature Animation for Walt Disney Pictures.The 33rd Disney animated feature film, it was directed by Mike Gabriel and Eric Goldberg and is loosely based on the life of the Native American woman of the same name. It portrays a fictionalized account of her historical encounter with Englishman John Smith and the Jamestown settlers that arrived from the Virginia Company.The voice cast stars Irene Bedard and Mel Gibson as Pocahontas and Smith, respectively, with David Ogden Stiers, Russell Means, Christian Bale, Billy Connolly, and Linda Hunt.The project went into development concurrently with The Lion King (1994) and attracted most of Disney's top animators.Pocahontas was released on June 23, 1995 to reviewers who praised its animation.Pocahontas earned $346 million at the box office.Pocahontas received 2 Academy Awards for Best Musical or Comedy Score for Menken and Best Original Song for "Colors of the Wind". Critics have noted the influence that Pocahontas had on subsequent films.