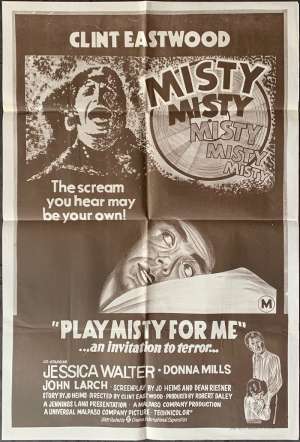 One Sheet Poster Rare Re-Issue.You more commonly see the USA one sheets.Play Misty for Me is a 1971 American psychological thriller film directed by and starring Clint Eastwood, in his directorial debut. Jessica Walter and Donna Mills co-star. The original music score was composed by Dee Barton (High Plains Drifter). In the film, Eastwood plays the role of a radio disc jockey being stalked by an obsessed female fan. The film was a critical and financial success, with Walter earning praise for her first major film role. Filming commenced in Monterey, California, in September 1970, and although this was Eastwood's debut as film director, Don Siegel (Coogan’s Bluff) stood by to help and also had an acting role in the film as a bartender. Meticulous planning and efficient directorship by Eastwood (which would become one of his trademarks) enabled the film to be made nearly $50,000 short of its $1 million budget, and it was completed four or five days ahead of schedule. It was a financial success, grossing $10.6 million at the box office against a budget of $950,000. Jessica Walter was nominated for the 1972 Golden Globe Award for Best Actress – Drama.