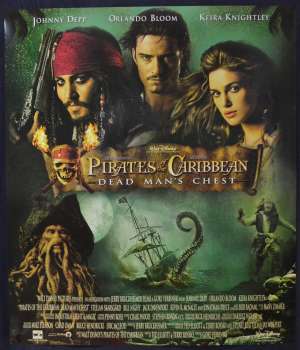 Original DVD poster - Trimmed.Pirates of the Caribbean: Dead Man's Chest is a 2006 American fantasy swashbuckler film, the second instalment of the Pirates of the Caribbean film series and the sequel to Pirates of the Caribbean: The Curse of the Black Pearl (2003). It was directed by Gore Verbinski, written by Ted Elliott and Terry Rossio, and produced by Jerry Bruckheimer. The stars of the first film all return including Orlando Bloom, Keira Knightley and Johnny Depp with Geoffrey Rush making a Cameo at the end.The film received Academy Award nominations for Best Art Direction, Sound Editing, Sound Mixing, and won the Academy Award for Visual Effects.