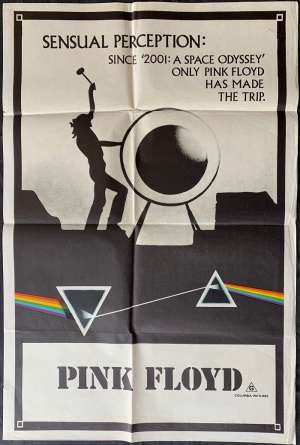 Rare Australian One Sheet Poster. Pink Floyd Sensual Perception (Live at Pompeii)is a 1972 concert documentary film directed by Adrian Maben and featuring the English rock group Pink Floyd performing at the ancient Roman amphitheatre in Pompeii, Italy. Although the band perform a typical live set from the era, there is no audience beyond the basic film crew. The main footage in and around the amphitheatre was filmed over four days in October 1971, using the band's regular touring equipment, including a mobile 8-track recorder from Paris (before being bumped up to 16-track in post-production).Additional footage filmed in a Paris television studio the following December was added for the original 1972 release.