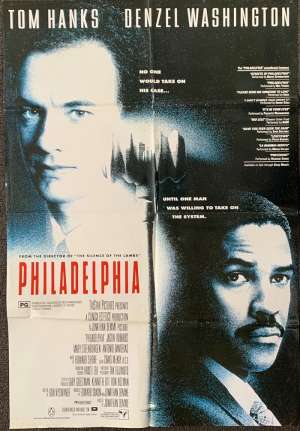 Australian One Sheet Poster.Philadelphia is a 1993 American legal drama film written by Ron Nyswaner, directed by Jonathan Demme and starring Tom Hanks (Andrew Beckett) and Denzel Washington (Joe Miller). Bill Murray and Robin Williams were considered for the role of Joe Miller. Daniel Day-Lewis was offered the role of Andrew Beckett but turned it down. It is notable for being one of the first mainstream Hollywood films to acknowledge HIV/AIDS. The events in the film are like the events in the lives of attorneys Geoffrey Bowers and Clarence Cain. Bowers was an attorney who, in 1987, sued the law firm Baker McKenzie for wrongful dismissal in one of the first AIDS discrimination cases. Cain was an attorney for Hyatt Legal Services who was fired after his employer found out he had AIDS. He sued Hyatt in 1990 and won just before his death. For his role as Andrew Beckett, Hanks won the Academy Award for Best Actor at the 66th Academy Awards, while the song "Streets of Philadelphia" by Bruce Springsteen won the Academy Award for Best Original Song. Nyswaner was also nominated for the Academy Award for Best Original Screenplay.