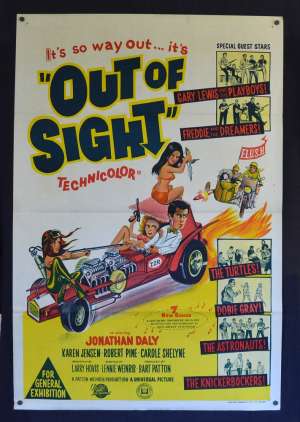 Very Rare Original Australian One Sheet Poster Out Of Sight

Out Of Sight is a 1966 beach party film with elements of the spy spoof. It is the third and last of a series of films geared at teenagers by director Lennie Weinrib and producer Bart Patton for Universal Pictures. Perhaps inspired by the success of the American International Pictures' teenage films, as well as Weinrib and Patton's Beach Party knockoff, Beach Ball, Universal and MCA signed a contract in 1965 for the pair to make 14 rock and roll films in a two-year period ,however, the only ones produced were Wild Wild Winter and this film. The title of the film was originally announced as Thunder Blunder a parody of James Bond’s Thunderball. Along with many other music artists, Freddie & The Dreamers perform two songs in the film: "Funny Over You" (written by Freddie Garrity) and "A Love Like You" (written by Quinn & Jones).