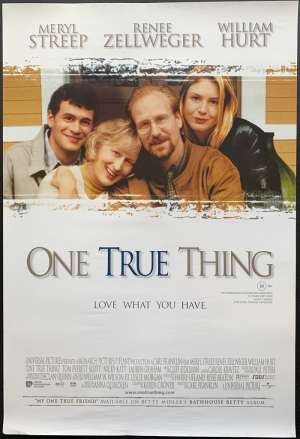 One Sheet Poster. One True Thing is a 1998 American drama film directed by Carl Franklin. It tells the story of a woman in her 20s who is forced to put her life on hold to care for her mother who is dying of cancer. The film stars Meryl Streep,William Hurt, Renée Zellweger and Tom Everett Scott. The script was adapted by Karen Croner from the novel by Anna Quindlen, with the story being based on Quindlen's own struggle with the death of her mother, Prudence Pantano Quindlen, from ovarian cancer in 1972. Bette Midler sings the lead song, "My One True Friend," over the end credits. The track was first released on Midler's 1998 album Bathhouse Betty. The film was shot in Morristown, NJ and Maplewood, NJ, as well as at the campus of Princeton University. Streep was nominated for the Academy Award for Best Actress for her performance in the film.