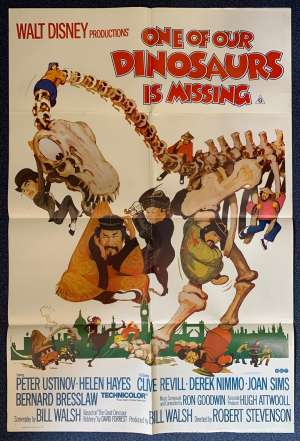 Original Australian One Sheet Poster One Of Our Dinosaurs Is Missing

One Sheet Poster.One of Our Dinosaurs is Missing is a 1975 British-American comedy film which is set in the early 1920s, about the theft of a dinosaur skeleton from the Natural History Museum. The film was produced by Walt Disney Productions and released by Buena Vista Distribution Company. The title is a parody of the film title One of Our Aircraft Is Missing, in which both Peter Ustinov and Hugh Burden also appeared. This film was made on location in England at Elstree Studios and Pinewood Studios, along with location shoots at London Zoo, the Natural History Museum and around Windsor, Berkshire and Holyport Green, Maidenhead. The Diplodocus skeleton model was later used in Star Wars Episode IV: A New Hope, in the opening scenes in the Tunisian desert. Whilst this film was in production, Bernard Bresslaw and Joan Sims also appeared in Carry On Behind, another film being made at Pinewood Studios alongside One of Our Dinosaurs is Missing. Jon Pertwee and Amanda Barrie, both of which were currently appearing in Dinosaurs, were also in several previous Carry On films.