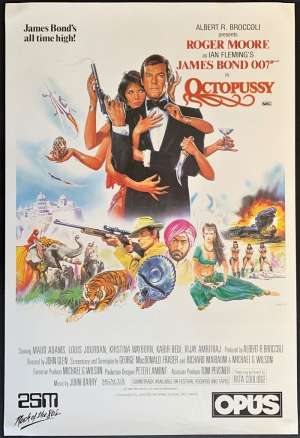 Rare Preview Screening Rolled Australian One Sheet Poster, a must have for any collector.Australian radio station 2SM had film promotion previews in the 1980s, and this rare poster is from a preview screening.Octopussy is a 1983 spy film and the thirteenth in the James Bond series produced by Eon Productions, and the sixth to star Roger Moore as the fictional MI6 agent James Bond. It was directed by John Glen. The film's title is taken from a short story in Ian Fleming's 1966 short story collection Octopussy and The Living Daylights, although the film's plot is original. It does, however, include a scene inspired by the Fleming short story "The Property of a Lady" (included in 1967 and later editions of Octopussy and The Living Daylights), while the events of the short story "Octopussy" form a part of the title character's background and are recounted by her. Bond is assigned the task of following a general who is stealing jewels and relics from the Soviet government. This leads him to a wealthy Afghan prince, Kamal Khan, and his associate, Octopussy, and the discovery of a plot to force disarmament in Western Europe with the use of a nuclear weapon. Octopussy was produced by Albert R. Broccoli and Michael G. Wilson, and was released in the same year as the non-Eon Bond film Never Say Never Again starring Sean Connery. The film earned $187.5 million against its $27.5 million budget. Critics praised it for the action sequences and locations. Maud Adams' performance was nominated for the Saturn Award for Best Supporting Actress and the film won the Golden Reel Award for Best Sound Editing.