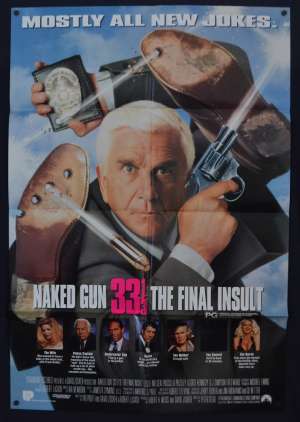 One Sheet Poster.Naked Gun ​33 1⁄3: The Final Insult is a 1994 American comedy film, and the third and final instalment in The Naked Gun film series, which was based on the television series Police Squad!. The "​33 1⁄3" in the title is a reference to the number of revolutions per minute at which long playing (LP) phonograph records play. The film was originally going to be titled The Naked Gun ​33 1⁄3: Just for the Record, but was changed after the studio felt that audiences would not get the joke. It was also going to simply be titled The Naked Gun 3: The Final Insult, according to some Christmas 1993 video previews. Leslie Nielsen returns as Lieutenant Frank Drebin (his original character from Police Squad!), along with Priscilla Presley as Jane Spencer Drebin, O. J. Simpson (his last film released before the notorious murders and his subsequent trial) as Officer Nordberg and George Kennedy as Captain Ed Hocken. Newcomers to the series Fred Ward, Anna Nicole Smith, and Kathleen Freeman co-star as a gang of bombers set to blow up the Academy Awards ceremony. Raye Birk reprises his role as the villainous "Pahpshmir" from The Naked Gun: From the Files of Police Squad. Numerous celebrities have cameo appearances in the film, both in credited and uncredited roles. The film grabbed the No. 1 weekend box office title in the U.S. during its opening weekend and made over $51 million in the United States and Canada and $122 million worldwide.