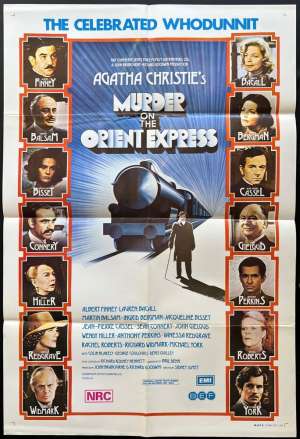 Murder On The Orient Express Poster Original One Sheet 1974

One Sheet Poster.Murder on the Orient Express is a 1974 British mystery film directed by Sidney Lumet, produced by John Brabourne and Richard Goodwin, and based on the 1934 novel of the same name by Agatha Christie. Agatha Christie had been quite displeased with some film adaptations of her works made in the 1960s, and accordingly was unwilling to sell any more film rights. Christie only gave approval to this because she liked the previous films of the producers, Romeo and Juliet and Tales of Beatrix Potter.Director Sidney Lumet went to Sean Connery first, saying that if you get the biggest star of the day, the rest will come along and they did.The film features the Belgian detective Hercule Poirot (Albert Finney),who is asked to investigate the murder of an American business tycoon aboard the Orient Express train. The suspects are portrayed by a notably all-star cast, including Lauren Bacall, Ingrid Bergman, John Gielgud, Vanessa Redgrave, Michael York, Jacqueline Bisset, Anthony Perkins, Richard Widmark and Wendy Hiller. The film was commercially and critically well-received. At the 47th Academy Awards it was nominated for 6 Academy Awards and won one. Christie later said that this and Witness for the Prosecution were the only adaptations of her books that she liked.