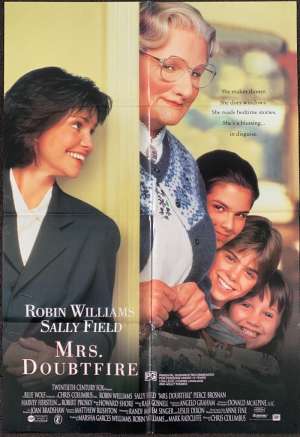 One Sheet Poster. Mrs. Doubtfire is a 1993 American comedy-drama film directed by Chris Columbus. Robin Williams, who also served as a producer, stars with Sally Field, Pierce Brosnan, Harvey Fierstein, and Robert Prosky. Tim Allen was offered the roles ultimately played by Williams and Brosnan but turned both of them down. It follows a recently divorced actor who dresses up as a female housekeeper to be able to interact with his children. The film address’s themes of divorce, separation, and the effect they have on a family. The film was released in the United States on November 24, 1993.It won the Academy Award for Best Makeup. The makeup for Mrs. Doubtfire's appearance took four hours to apply. Williams later recounted how he used to walk through San Francisco dressed in full makeup and costume as Mrs. Doubtfire. Mrs. Doubtfire went on to win the Golden Globe Award for Best Motion Picture – Musical or Comedy. Robin Williams was awarded the Golden Globe Award for Best Actor in a Motion Picture – Musical or Comedy. It grossed $441.3 million on a $25 million budget, becoming the second highest-grossing film of 1993 worldwide.