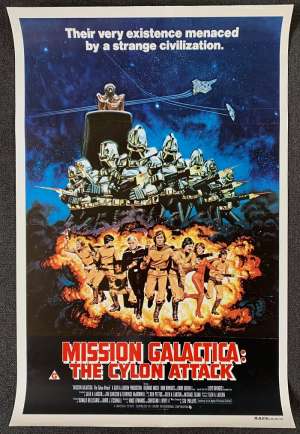 Australian One Sheet Poster with cool artwork by Robert Tanenbaum.The poster was originally issued folded but has been stored flat and is now in a rare rolled condition and will be sent that way.Mission Galactica: The Cylon Attack 1980 starring Richard Hatch, Dirk Benedict and Lorne Greene was a re-edited version of the episodes "The Living Legend" and "Fire in Space" from the original TV series Battlestar Galactica 1979. These re-edited versions differed from the broadcast versions as they omitted several scenes from both episodes. In 1979, it was released theatrically in continental Europe,Japan, UK and Australia in 1980.