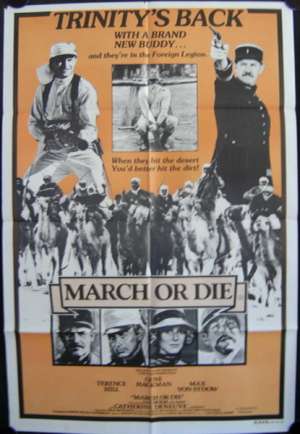 One Sheet Movie Poster.March or Die is a 1977 British war drama film directed by Dick Richards and starring Gene Hackman, Terence Hill, Catherine Deneuve, Max von Sydow and Ian Holm. The film celebrates the 1920s French Foreign Legion. Foreign Legion Major Foster (Hackman), a war-weary American haunted by his memories of the recently ended Great War, is assigned to protect a group of archaeologists at a dig site in Erfoud in Morocco from Bedouin revolutionaries led by El-Krim (based on Moroccan revolutionary Abd el-Krim). Dick Richards had been interested in the French Foreign Legion ever since he found out a friend of his uncle's had joined the legion. Most of the finance was provided by Lew Grade's ITC Company on the basis of Terence Hill's popularity. It was Hill's second film aimed at the American market. Filming started 23 August 1976 and was mostly shot in Spain. Gene Hackman was injured during filming after he was thrown off a horse causing filming to be suspended. Columbia only agreed to distribute the film in the US because they wanted to distribute Grade's ‘The Eagle Has Landed’ consequently in most markets, March Or Die was shown in theatres as a double-bill with Eagle.