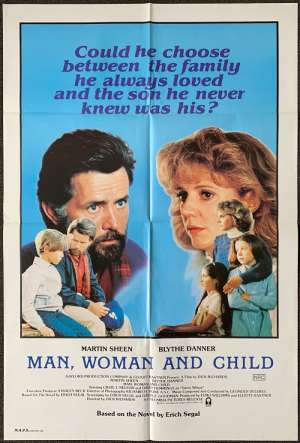 One Sheet Poster.Man, Woman and Child is a 1982 American drama film directed by Dick Richards and written by Erich Segal and David Zelag Goodman. It is based on Erich Segal's book of the same name. The film stars Martin Sheen, Blythe Danner, Craig T. Nelson, David Hemmings, Nathalie Nell and Maureen Anderman. The film was released on April 1, 1983, by Paramount Pictures. Martin Sheen is Robert, the man - a sensitive, intelligent family man who, in one brief and innocent affair long past, fathered a child whose sudden appearance threatens his happy life. Blythe Danner is Sheila, the woman - a strong loving wife and mother whose deep love and commitment are stretched to the breaking point by the unexpected arrival of her husband's illegitimate son. Crafted in the tender tradition of Love Story, what follows is an evocative, emotionally-charged movie about a typical American family whose deep love is shaken, tested and ultimately reaffirmed.