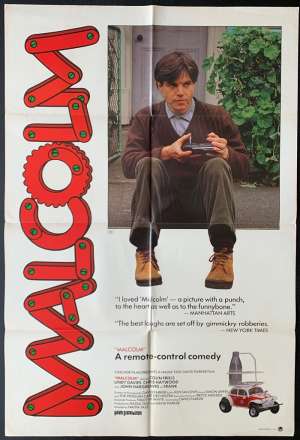 Country Of Origin One Sheet Poster.Malcolm is a 1986 Australian cult film comedy, written by the husband-and-wife team of David Parker and Nadia Tass, and directed by Nadia Tass (who made her debut as a feature director on this film).The film stars Colin Friels as Malcolm, a tram enthusiast who becomes involved with a pair of would-be bank robbers. His co-stars are Lindy Davies and John Hargreaves. As revealed in the closing credits, the character of Malcolm was inspired by Nadia Tass' late brother, John Tassopoulos, who died after suffering an epileptic seizure after being hit by a car in 1983.As portrayed by Friels, Malcolm exhibits many traits that are characteristic of someone with high-functioning autism or Asperger syndrome, including a peculiar walk, reluctance to make eye contact, poor social skills and a deep-focus, obsessive interest (in this case, trams). Raising money was very difficult. TV station Channel Seven agreed to provide $175,000 as a pre-sale, Film Victoria came in for $100,000 and the rest of the movie was raised from Parker and Tass mortgaging their house. All of the gadgets in Malcolm's house and the ingenious inventions used in the robbery sequences were devised by writer David Parker.The film won the 1986 Australian Film Institute Award for Best Film, and seven other AFI awards including Best Script and Best Director.