Loving And Laughing Poster Original One Sheet 1971 Sexploitation Getting High 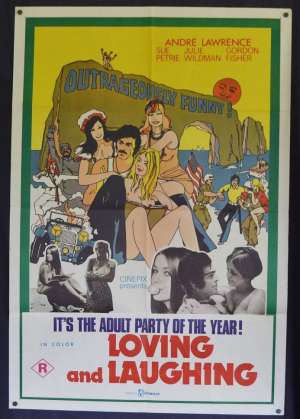 Loving And Laughing 1971 Aka The Importance of Being Sexy is a Quebec sex farce about a straitlaced young man who spends time in a commune, while a hippie takes his place as a French tutor for a rich family's daughter. In 1971, St Albans was delighted when this movie was filmed in their town. Locals were cast as extras and many of the town's higher-ups such as the mayor and police chief were invited to the premier in Montreal. You can imagine their surprise when the movie started and they learned that the movie had received an X rating classification. In Australian it was given an R rating classification.