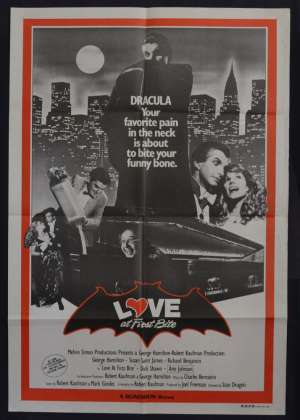 One Sheet Poster.Love at First Bite is a 1979 horror comedy film directed by Stan Dragoti and written by Robert Kaufman, using characters originally created by Bram Stoker. It stars George Hamilton, Susan Saint James, Richard Benjamin and Arte Johnson. The original music score was composed by Charles Bernstein. The film's tagline is: "Your favourite pain in the neck is about to bite your funny bone!" The film was a financial success, earning about $44 million against a $3 million budget and ranking at number 13 on a list of the top grossing films of 1979. In fact, it was one of the highest grossing films of all time for many years. One critic described it as "a coarse, delightful little movie with a bang-up cast and no pretensions at all”. The film earned a Golden Globe nomination for Best Actor.