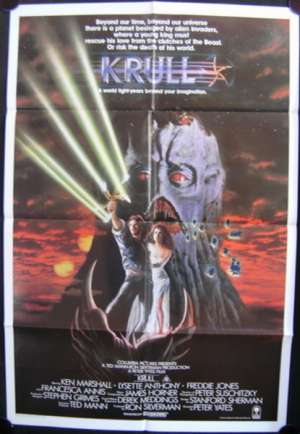 One Sheet Movie Poster.Krull is a 1983 science fantasy swashbuckler film directed by Peter Yates and written by Stanford Sherman. It follows a journey of Prince Colwyn and his group of outlaws on the planet Krull to save future queen Princess Lyssa from the Beast and his constantly teleporting Black Fortress.The film stars an ensemble cast:Ken Marshall as Prince Colwyn, Lysette Anthony as Princess Lyssa, Trevor Martin as the voice of the Beast, Freddie Jones as Ynyr, Bernard Bresslaw as Rell the Cyclops, David Battley as Ergo the Magnificent, Tony Church and Bernard Archard as kings and the fathers of Colwyn and Lyssa, Alun Armstrong as the leader of a group of bandits that include early screen roles for actors Liam Neeson and Robbie Coltrane, John Welsh as The Emerald Seer, Graham McGrath as Titch, and Francesca Annis as The Widow of the Web. The movie was shot at several sound stages at Pinewood Studios. Actors such as Marshall, Bresslaw and Jones performed dangerous stunts during filming. An international co-production of the United Kingdom and the United States, Krull was released in July 1983. Numerous reviewers have highlighted its visual effects and soundtrack. The film has gone on to achieve cult film status.