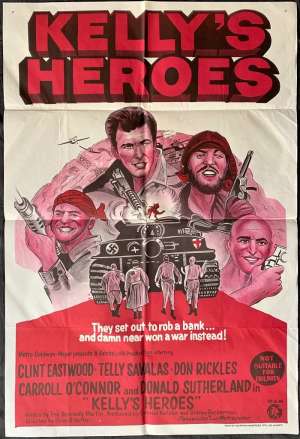 Rare One Sheet size poster re-issue.Kelly's Heroes is a 1970 American war film, directed by Brian G. Hutton, about a group of World War II American soldiers who go AWOL to rob a bank behind enemy lines. The film stars Clint Eastwood, Telly Savalas, Don Rickles, Carroll O'Connor, and Donald Sutherland, with secondary roles played by Harry Dean Stanton, Gavin MacLeod, and Stuart Margolin. The screenplay was written by British film and television writer Troy Kennedy Martin. The film was a US-Yugoslav co-production, filmed mainly in the Croat village of Vižinada on the Istria peninsula. One of the reasons for the selection of Yugoslavia as the main location was that, in 1969, it was one of the few nations whose army were still equipped with operating World War II mechanized equipment, both German and American. This simplified logistics tremendously. The film received mostly positive reviews and was voted at number 34 in Channel 4's 100 Greatest War Films of All Time.