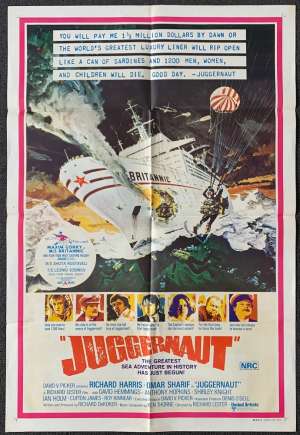 Poster art by Bob McCall. Juggernaut is a 1974 British crime suspense film starring Richard Harris,Anthony Hopkins,Ian Holm,Julian Glover, Michael Hordern,Jack Watson and Omar Sharif.The film, which was directed by Richard Lester, was largely shot on location aboard the TS Mazim Gorkly owned by the Soviet Black Sea Shipping Company. Director Richard Lester says film production was scheduled for ten weeks but was completed in six and was a great experience. The plot of the film was inspired by real events aboard QE2 in May 1972 when Royal Marines from the Special Boat Service were parachuted on to the ship because of a bomb hoax. In the film, Richard Harris leads a team of Naval bomb disposal experts sent to disarm several large barrel bombs that have been placed aboard an ocean liner crossing the North Atlantic. Meanwhile, ashore, the police race against time to track down the mysterious bomb maker, who calls himself "Juggernaut," who will for a ransom reveal the information that will disarm the bombs. When it came to getting extras for the film, advertisements were run in British papers asking the public if they would take a lengthy cruise in the North Sea for free but with the knowledge that the ship would actually seek out the worst possible weather. As the story demanded, these seas had to be too rough for the lifeboats to be lowered, trapping the passengers on board. Although Juggernaught was not considered to be a part of the popular disaster film genre at the time, the public thought it was.