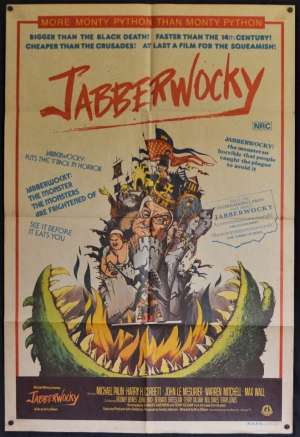 Jabberwocky is a 1977 British fantasy film co-written and directed by Terry Gilliam. It stars Michael Palin as a young cooper who is forced through clumsy, often slapstick misfortunes to hunt a terrible dragon after the death of his father. The film's title is taken from the nonsense poem "Jabberwocky" from Lewis Carroll's Through the Looking-Glass (1871).The film was Gilliam's first as a solo director. The film is close in setting and comic style to Monty Python and the Holy Grail, on which Gilliam had worked. As well as Palin, Python Terry Jones and Python contributor Neil Innes appeared in Jabberwocky, giving it a Python-esque feel, with many scenes (such as the "hide and seek" jousting tournament) reminiscent of Holy Grail.