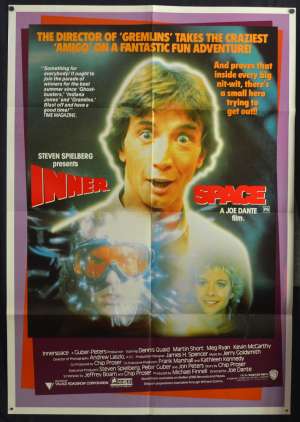 Original Australian One Sheet movie poster.Innerspace is a 1987 American science fiction comedy film directed by Joe Dante and produced by Michael Finnell. Steven Spielberg served as executive producer. The film was inspired by the 1966 science fiction film Fantastic Voyage. It stars Dennis Quaid, Martin Short and Meg Ryan, with Robert Picardo and Kevin McCarthy, with music composed by Jerry Goldsmith. It earned well over $25 million in its domestic gross revenue and won an Oscar, the only film directed by Dante to do so. The film was also well received by Critics.