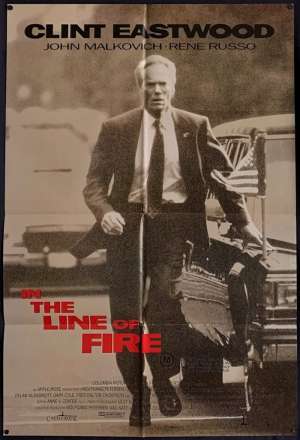 Original Australian One Sheet Poster.In the Line of Fire is a 1993 American action thriller film directed by Wolfgang Petersen, and starring Clint Eastwood, John Malkovich and Rene Russo. Written by Jeff Maguire, the film is about a disillusioned and obsessed former CIA agent who attempts to assassinate the President of the United States and the Secret Service agent who tracks him. Eastwood's character is the sole active-duty Secret Service agent remaining from the detail guarding John F. Kennedy in Dallas, Texas, at the time of his assassination in 1963. The film also stars Dylan McDermott, Gary Cole, John Mahoney, and Fred Thompson. Eastwood and Petersen also originally offered the role of Leary to Robert De Niro, who turned it down due to scheduling conflicts with A Bronx Tale. In the Line of Fire was the final film Eastwood starred in that he did not direct by himself until 2012's Trouble with the Curve.