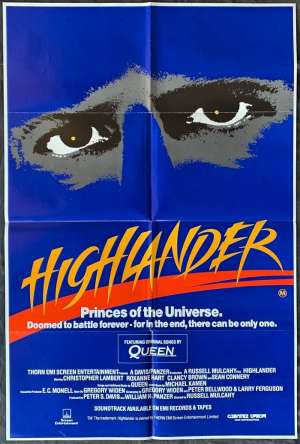 One Sheet Poster.Highlander is a 1986 British-American action fantasy film directed by Russell Mulcahy and based on a story by Gregory Widen. It stars Christopher Lambert, Sean Connery, Clancy Brown, and Roxanne Hart. The film narrates the climax of an ages-old battle between immortal warriors, depicted through interwoven past and present day storylines. Despite having enjoyed little success in its initial U.S. release, Highlander became a cult film, launched Lambert to stardom, and inspired a franchise that included film sequels and television spin-offs. Its tagline, "There can be only one", has carried on throughout the franchise, as have the songs provided for the film by the rock band Queen.