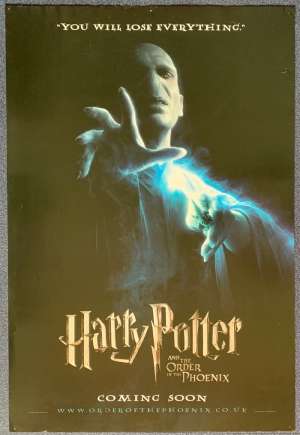 Rare country of origin poster.Double sided teaser English one-sheet poster (note the complete lack of credits on the poster).Harry Potter and the Order of the Phoenix is a 2007 fantasy film directed by David Yates and distributed by Warner Bros. Pictures. It is based on J. K. Rowling's 2003 novel of the same name., it was written by Michael Goldenberg (making this the only film in the series not to be scripted by Steve Kloves) and produced by David Heyman and David Barron. The story follows Harry Potter's fifth year at Hogwarts School of Witchcraft and Wizardry as the Ministry of Magic is in denial of Lord Voldemort's return. The film stars Daniel Radcliffe as Harry Potter, alongside Rupert Grint and Emma Watson as Harry's best friends Ron Weasley and Hermione Granger. It is the sequel to Harry Potter and the Goblet of Fire and is followed by Harry Potter and the Half-Blood Prince. Live-action filming took place in England and Scotland for exterior locations and Leavesden Film Studios in Watford for interior locations from February to November 2006, with a one-month break in June. Post-production on the film continued for several months afterwards to add in visual effects. The film's budget was reportedly between £75 and 100 million ($150–200 million).Warner Bros. released the film in the United Kingdom on 12 July 2007 and in North America on 11 July, both in conventional and IMAX theatres; it is the first Potter film to be released in IMAX 3D.Order of the Phoenix opened to a worldwide five-day opening of $333 million, twenty-fifth of all-time, and grossed $942 million total.